The tabletop setting is a delight for anyone who loves miniatures

When it comes to miniatures wargaming — stuff like Warhammer 40,000 or Flames of War — I’m a terrain guy. I love the look and feel of a beautifully modeled table that embodies its setting or tells a story, the kind of stuff that you only see at big conventions. So when I laid hands on Brass Tactics in the lead up to last year’s E3, I was enthusiastic about its prospects. Here was a real-time strategy game, built for virtual reality, that was custom made to look like a tabletop miniatures game.

The final product, which was released this week, far exceeds my expectations.

Brass Tactics is exclusive to the Oculus Rift, and requires the use of Touch controllers. That absolutely limits its audience. But if you have access to the gear, there’s no reason not to give it a try. (There’s a free demo.) The full product, which goes for $39.99, includes the full campaign as well as skirmish and co-operative modes across eight maps. It also features multiplayer.

The user interface is pretty clever. The Touch controllers serve as magic gauntlets. Using the controllers’ triggers you can move the table around. Grabbing the table with one hand lets you reposition yourself over the top of it, while grabbing it with both hands allows you to raise it up or down. If you hold down a trigger and sweep your hand over a group of units you’ll select them all. Then, using a kind of laser pointer, you can give them waypoints or targets across the map. Upgrades for your fortress and buildings that you can place on the battlefield are found on a pallet, accessed by rolling your right wrist over so your hand faces palm up. Grabbing with your left, you can then plant those buildings into sockets on the map.

The campaign itself is pretty standard fare, serving by and large as an extended and at times challenging tutorial. Archers do well against warriors, but only at range. Cavalry do well against both archers and warriors while flying units wreak havoc on just about everything stuck to the ground. There’s not a lot of nuance to it. The fun comes from maneuvering your forces around using grand gestures with the Touch controllers.

It’s a node-based RTS game, meaning that there will be some push and pull across the maps which differentiate themselves by their use of elevation and the number of lanes they provide. But the settings themselves are absolutely fantastic.

My favorite was the snowy terrain, which I played inside a dimly lit veranda. It’s ringed on all sides by a rocky ice wall, making it feel a bit like a scene from Game of Thrones. The Unreal Engine performs well, with elaborate use of light and shadow all over the map. There’s also a colosseum-like map for quick skirmishes that’s full of little nooks and crannies to explore. 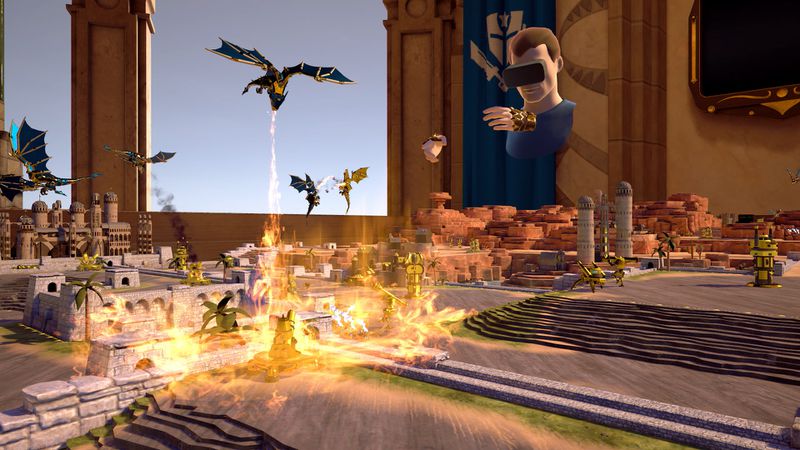 Holding that elaborate terrain is an equally elaborate wooden gaming table. I spent most of my time getting right down at eye-level with my units to see the map from their perspective. Unfortunately, the game doesn’t make great use of that ability to see line-of-sight. Units are mostly limited by their range, and if they can reach a target they can hit it.

The units themselves are much more detailed than what was shown to the press last year — far more crisp and high-resolution than I’ve seen in a VR game in a long time. Each of the steampunk-inspired clockwork warriors has its own set of movement and attack animations that make them feel like finely painted miniatures come to life. The only oversight is the lack of hero-type units.

As far as comfort level goes, getting down too close to the action while you move around can cause discomfort. The table moves quickly and watching the terrain fly by made me a bit nauseous after a while. The game allows you to play while standing, but you can just as easily sit. I also recommend that you move your focal point up off the table to the walls of the room around you.

As with many video games, the most obnoxious part of online multiplayer is getting teamed up against random people. It’s one thing to have some moron typing expletives into open chat and quite another to have them flying at your face and waving their hands around while they do so. Avoid open play or at least mute voice chat, and try to stick to waging war only against your friends.

Overall, I think that Brass Tactics is a great foundation for Hidden Path in the VR space. With such an excellent pedigree of RTS franchises like Defense Grid and Age of Empires, it would be exciting to see them get access to a killer license in the future. Something like Brass Tactics, but applied to Lord of the Rings or Warhammer, could lead to something truly inspired.